London is a vast multicultural city and the Capital of England UK founded by the Romans in AD50 known as Londinium. It has 32 boroughs, with the regional authority based at City Hall just by Tower Bridge. It's a vibrant place with lots of historical buildings, theatres and museums to explore.

The climate is temperate marine which means a steady temperature, but summers can be wet although generally not too cold because of the number of buildings that keep the day time heat.

London is a large capital city of England UK and speaks one main language. The city of London is the traditional "Square Mile" where the stock exchange is based, but in recent years much of the financial district has moved out to Canary Wharf.

The oldest tube or metro system which covers hundreds of miles underground serves most of the London area. It's cheap, fast and easy to get to all the main areas. The electronic ticketing system uses either a pre-paid "Oyster Card" system or pay with your direct debit card with higher charges. The traditional red buses (known as Routemasters) are all around the city and can be another exciting way to move from place to place. There are sightseeing buses which offer guided tours with commentary so you can see all the famous places and buildings and get some history while you're travelling.

London is located in the south east of England on the Thames river and is surrounded by the M25 motorway and has excellent road, rail and air links to the rest of the UK, Europe and the World.

London is made up of many regions, and the most popular are Fulham, Hackney, Islington, Battersea, Brixton, Hammersmith, Clapham, Hampstead, Putney, Holborn and Oxford Street for the famous shops.

Below is a map of the surrounding areas in Brussels. The airport is located on the outskirts of the city but is only a 20-minute drive into town. 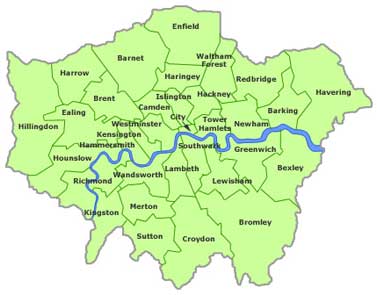 Things to see and do in London

Things to do and see outside of London

Because of where the capital city is there are many things to do and see just outside of London. Perhaps the most popular is a visit to Windsor Castle where the Queen stays when she is not in London. The castle is in excellent condition, and you can view the Queens apartments and the doll house collection.

The main London airport is called Heathrow located on the west side of London approximately 16 miles from the centre. A taxi ride will take at least 40 minutes to get into the city and costs upwards of £60 whereas there is the slower but much cheaper tube system located under the airport or the Heathrow Express overground train which costs about £20 one way and takes 15 minutes.

Heathrow serves most of the UK, Europe and the rest of the World and is a modern if hectic airport with most facilities. Normally you will pay a little extra to fly in and out of Heathrow rather than other airports.

Gatwick airport is located south west of London about 60 miles from the city. You can drive in (a taxi will cost too much) or get the Gatwick Express which takes about 30 minutes. Gatwick, although named a London airport is mostly for charter/ holiday flight traffic.

Both airports have hotels close by if you need to stay the night before a flight - but book early because these can be very expensive.

Hotels in London are very expensive, and the rooms can be tiny and of poor decorative state if you are staying in a cheap budget hotel. The rooms are expensive during the week because of business customers and in the summer because of tourism. It's best if you can stay in one of the Branded hotels because you know you'll get a clean room.

There's a chain called Premier Inn which offers cheaper accommodation as well as Holiday Inn in Kensington which is just outside near Harrods. Other chains include Hilton, Sofitel, Marriot and Thistle which all offer excellent value for money.